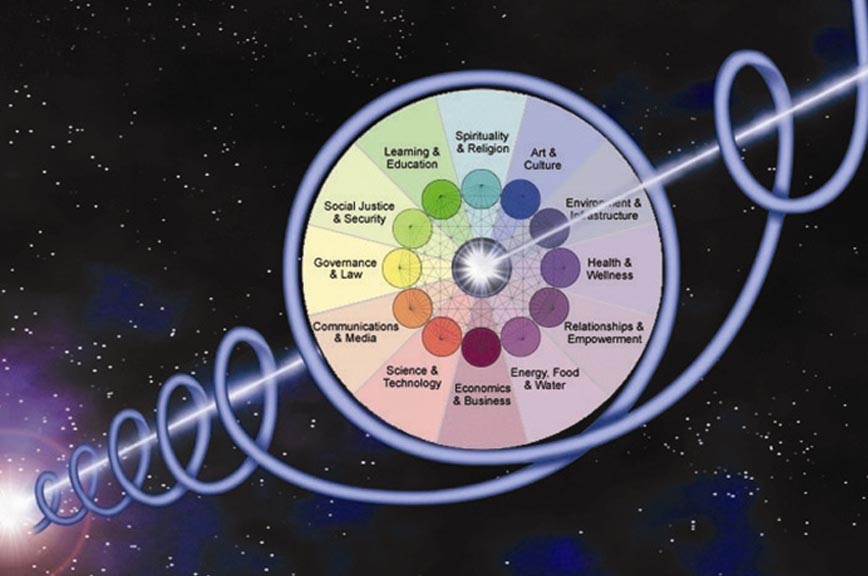 The core narrative begins with the progressive development of humanity’s knowing faculty or consciousness: from sensory consciousness to feeling consciousness to thinking consciousness and, increasingly, to reflective consciousness. The name for our human species is Homo sapiens sapiens. “Sapiens” means knowing, so we are the species that is doubly knowing. We have the capacity to bring conscious reflection to our actions and their consequences and with that knowledge make new choices about our pathway through Life, both individually and collectively.

All of the world’s spiritual traditions as well as psychotherapy are based upon the insight that the first step in awakening and healing is to simply “see what is.” Our healing practice is to become an objective witness or impartial observer of our lives and tell ourselves the truth about our situation. Honest self-reflection and non-judgmental witnessing provide a way to cut through the surface chatter of our lives to reveal the deeper voice of our soul. We then can take soulful responsibility for our lives and relationships as we progressively unfold our capacity for living more consciously.

Within the past few decades, the combined power of television, the internet, and the enhanced seeing capacities of telescopes, microscopes and space probes has produced a stunning revolution in our capacity to observe ourselves as a species. With the global communications revolution, the world is becoming transparent to itself. Humanity is becoming a collective witness to its own journey and the consequences of its collective actions. This opens a whole new possibility for consciously choosing the direction of our own evolution.

The What, Why, and How of Conscious Evolution

Evolutionary Leaders at the United Nations

On June 4, 2013, several Evolutionary Leaders offered “TED-style” presentations to the UN diplomatic and NGO community at the Permanent Mission of Nigeria, in a program organized in honor of World Environment Day by the Source of Synergy Foundation and the NGO Committee on Spirituality, Values & Global Concerns-NY. The program was entitled “The Great Transition,” expressing the theme of the Evolutionary Leaders retreat exploring Humanity at the Tipping Point: Evolutionary Responses to Global Challenges. Here are those presentations.

A short video in which scientist, Elisabet Sahtouris, explores the question of whether consciousness is evolving.

The Nature of the ‘Self’

Peter Russell tells how we create an artificial, illsurory, sense of self from what we have or do. Opening to our true nature brings relief and ease.

Is Humanity Waking Up?

In this wide-ranging, half-hour conversation, Peter Russell and Duane Elgin explore whether humanity is waking up to a new level of consciousness? If so, what changes in consciousness are underway? Can we wake up in time?

The ‘Power of Consciousness’

Bruce Lipton speaks about the power of consciousness:

The Mind of the Dolphin