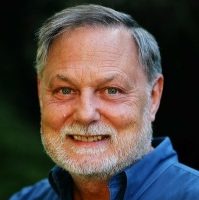 DUANE ELGIN is an internationally recognized speaker, author, and social visionary. He has an MBA from the Wharton Business School, an MA in economic history from the University of Pennsylvania, and an honorary Doctor of Philosophy for work in “ecological and spiritual transformation” from the California Institute of Integral Studies, San Francisco, CA. In 2006, Duane received the Japanese “Goi International Peace Award” in recognition of his contribution to a global “vision, consciousness, and lifestyle” that fosters a “more sustainable and spiritual culture.”

His books include: Choosing Earth: Humanity’s Great Transition to a Mature Planetary Civilization (2020), The Living Universe: Where Are We? Who Are We? Where Are We Going? (2009); Promise Ahead: A Vision of Hope and Action for Humanity’s Future (2000), Voluntary Simplicity: Toward a Way of Life that is Outwardly Simple, Inwardly Rich (2010, 1993 and 1981), and Awakening Earth: Exploring the Evolution of Human Culture and Consciousness (1993). With Joseph Campbell and other scholars he co-authored the book Changing Images of Man (1982). In addition, Duane has contributed chapters to twenty-two books, and has published more than a hundred major articles, blogs, and reports.

In the early 1970s, worked as a senior staff member of a joint Presidential-Congressional Commission on the American Future. He then worked as a senior social scientist with the think-tank SRI International where he coauthored numerous long-range, futures studies, such as: Anticipating Future National and Global Problems (for the President’s Science Advisor), Alternative Futures for Environmental Policy (for the Environmental Protection Agency), The Future of the Automobile (for the Ford Motor Co.), and Limits to the Management of Large, Complex Systems (for the President’s Science Advisor).

Over the past thirty years, Duane has co-founded three non-profit and trans-partisan organizations concerned with media accountability and citizen empowerment.

As a speaker, Duane has given more than 300 keynotes and workshops with audiences ranging from business executives and civic groups to churches and college students. He has also given 23 online keynotes, courses, and seminars.

With Peter Russell (author of The Global Brain and other books), he co-created a series of seven, half-hour video programs called “Pete and Duane’s Window.”

Voluntary Simplicity and a Thriving Future

Here is a short introduction to the idea of a living universe.