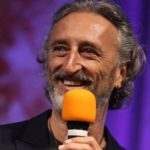 Maurizio grew up in Genova, Italy, where he spent the early part of his adult life working for the local government creating internationally renowned social centers, and writing about education and pedagogy. It was also at an early age that he began actively traveling the spiritual path, exploring the practices of Zen Buddhism, Transcendental Meditation, Yogic philosophy, Catholicism and Philosophy.

In 1985 Maurizio set out to cross the Atlantic Ocean to reach the United States on the Leudo ”Felice Manin”, a 98 years old Lateen sailboat. The journey took four months and landed Maurizio in New York City where he remained for 17 years, pursuing a career in television and motion picture production. He has experience in all aspects of production both in front of and behind the camera, including acting, directing, cinematography, and distribution.