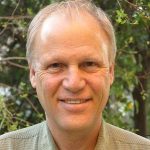 William Keepin is co-founder and Co-Director of Satyana Institute. Will founded the Gender Reconciliation International project (also called Power of Reconciliation), which has organized more than 75 intensive gatherings in seven countries for healing and reconciliation between women and men. A mathematical physicist with thirty scientific publications on sustainable energy and global warming, he presented testimony to European and Australian parliaments and the US House of Representatives, and became a whistleblower in nuclear science policy (recounted in The Cultural Creatives by Paul Ray and Sherry Anderson, Harmony Books, 2000). Will began practicing silent meditation in 1982, trained extensively in spiritual traditions East and West, holds an M.A. degree in East-West psychology from the California Institute of Integral Studies, and has facilitated Holotropic Breathwork for 20 years (Grof Transpersonal Training). He leads retreats on interfaith mysticism and interspiritual practice, is a Fellow of the Findhorn Foundation, and adjunct faculty at Holy Names University. Will is author of Divine Duality: The Power of Reconciliation Between Women and Men (Hohm Press, 2007), co-author of Women Healing Women (Hohm Press, 2009), and his new book is Song of the Earth: The Emerging Synthesis of Spiritual and Scientific Worldviews (Permanent Publications, London, UK, 2012).